Charles Barkley is one of TV’s highest paid talking heads. So is Skip Bayless.

The former NBA superstar took some time during Tuesday night’s broadcast of “NBA On TNT” to take a verbal jab at Skip Bayless.

Word quickly got back to Skip, who replied on Twitter:

Barkley took his swipe at Skip over comments Skip Bayless made about Damian Lillard. Skip and Lillard were beefing over Skip’s criticism of the Blazers superstar.

“I have never been buying nothing about you fam,” Lillard tweeted at Bayless. “You a joke. And after our private convo full of backpedaling you will never have my respect.”

Barkley was defending Lillard, but it’s not his first rodeo with Skip. During a 2017 interview on “The Dan Patrick Show,” Barkley said he’d be willing to kill Bayless.

You have to love the Chuck versus Skip beef.

Tom Brady writes his parents a letter from training camp

Rob Schneider cutouts were placed all over PNC Park in Pittsburgh 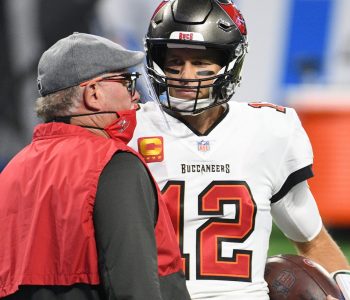